The late great Ambrose Bierce said a cynic sees the world as it is, not as it should be. So I wonder if it has occurred to anybody out there that Donald Duck's current machinations are the culmination of several months of groundwork involving the television networks - how to keep Amuricans glued to the election coverage after the election's over. This may be their last chance to cash in on Trumpelstiltskin and it seems unlikely that it would be an accident.

I'm just sayin'. With the right perspective everything can make sense.
at 10:01 PM 2 comments:

Watch the bar. It keeps dropping. Used to be people said, "Anybody'd be better than George Bush." Now it's "Anything's better than Trump." That's our new democratic process. That's how we choose pur president. Put a Republican in who makes the next guy look good. Just keep lowering the bar. What could be more American? Kids are told anybody can be president in the U.S. and darned if it ain't so. (anybody but a strong people's advocate like Ralph Nader, Eugene McCarthy or Bernie Sanders). Next it'll be anything's better than Biden and so it will go God only knows where. You would think Trump is the crud on the bottom of the barrel but best not to underestimate the force of gravity.

President should be the grreatest American we've got. Not the worst. Sharpest tool in the shed, not the dullest. It shouldn't be terribly hard to select a group of such individuals and draft one of them into service. He/she doesn't want the job, too bad. If this country can draft rabble into battle, then it should at least draft elite for government. Then the rest of us can just get on with our lives. sometimes monarchy desn't seem like such a bad idea. They got 'em side by side in England and it was the elected guy who got sucked into bombing Iraq.
at 9:58 AM No comments:

if you vote, don't gripe

An urgent message to all potential voters: don't do it. If you keep acquiesing to this game, democracy will never get well. Look at the brilliant choice we have before us and see the farce. Boycott the election. Say Hell no, we won't go! (to the polls) If not now, when? Stop and never vote again until public service is not a pathway to wealth, until the president can actually be the peoples' representative, not the system's figurehead for us to focus our frustration and blame on. End Citizens United, eliminate the Selectoral College and draft citizens into public service. Everybody may have to go to Washington but not war. Politics, like coaching and Boy Scouts, attracts the worst elements of society. Why keep letting the worst people we have run the show? With a draft at least it will be random instead of just dumb. If Americans refuse to line up like cattle no matter who the hell they have to vote for it will scare the Raisinettes out of the establishment and it's the only thing that will. The time is now. Just do it. Not!

it's all jus' balderdash

Now that it's a pie fight, the Good Republican Romney is decrying the loss of civility. What really bugs him is that civility took the curtain with it and now the rabble can see more clearly than ever that a troupe of clowns postures in front of us for our stamp of approval in determining our fate. The master doesn't mind his peers seeing him naked but it just don't feel right if the slaves do. All Mitt's “colleagues” are strppin' down and parading down Main Street with Lindsey Graham's rattling buttocks (Graham Crackers) leading the way, shouting, “Look at us, pathetic fools from all walks of life, see how we look without trappings. Now you can vote for my big, fat belly or my shriveled legs,” like they just don't care anymore about pretending to care about issues. Kind of like the time ol' Cap'n Cook dropped his guard along with his drawers and got caught takin' a dump and the natives seen he warn't no god and ever'thing changed. Yep, all this probably makes it harder for the Mitt to prance around feeling like ruling club still means sumpin to anybody but the members. 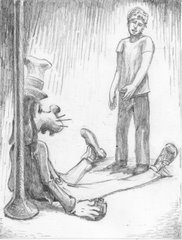 Tom Levine lives in Orlando, Florida and sells stories to magazines. He is the author of two books, the newly published novel Paradise Interrupted and the essay collection BITE ME! Tom Levine's Most Excellent Stories. His books can be purchased online at DefiantWorm.com. Also, his writings can be viewed on TalentDatabase.com.